Home / News / Celebrating 25 Years of Hibernia The Project That ‘Began an Industry’ in Newfoundland and Labrador
November 28, 2022 News Releases 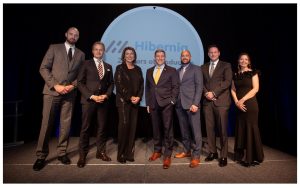 On Wednesday, November 16, 600 people attended a gala commemorating the 25th anniversary of the Hibernia project. This event was a collaborative effort by Energy NL and The Hibernia Management and Development Company (HMDC) and was a true celebration of the project that began the industry and transformed the provincial economy in Newfoundland and Labrador.

Those in attendance included some of the original architects of Hibernia, past and present employees, government dignitaries and officials, as well as many industry representatives and supporters. It was a night of nostalgia, and an overwhelming sense of pride and excitement could be felt throughout the venue.

The emcee for the evening was Margot Bruce-O’Connell, Manager of Public and Government Affairs and Vice President, ExxonMobil Canada and HMDC, who shared anecdotal and fun facts about the project. There were several guest speakers including Charlene Johnson, CEO, Energy NL; Stephen Edwards, President, HMDC; Dr. Andrew Furey, Premier of Newfoundland and Labrador; and Minister Seamus O’Regan, Government of Canada. 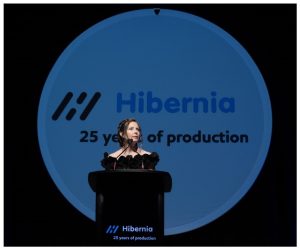 Charlene Johnson spoke passionately about Hibernia, saying “In the beginning there were doubters. You may have been less likely to find supporters than doubters.” At that time, it seemed so many, from the national media to the federal auditor general were very strongly opposed to the project. “They doubted our commitment. They doubted our capabilities. Were they ever wrong,” said Charlene referring to Hibernia and its overwhelming success. “Not only did we do it, but it has been a brazen success!”

Charlene spoke of the difficult path to success, focusing on our determination, tenacity and willingness to face adversity head on – an often-common theme in Newfoundland and Labrador’s history. Charlene spoke in admiration of the early pioneers and leaders of our industry, the driving forces of the supply and service sector and the founders of Noia, now Energy NL. They were determined to learn, grow, and ultimately, succeed. And succeed they did! Newfoundland and Labrador has built an offshore industry second to none. As Charlene said, “We have built an industry with a reliable, knowledgeable, and leading-edge supply and service sector, one that continues to push the boundaries of excellence and achievement. We are innovators. We are leaders. We are an offshore jurisdiction.”

Stephen Edwards shared a video showcasing the many memories and faces of Hibernia throughout the last 25 years, and earlier when you consider the skilled professionals who designed and built the GBS. Stephen invited a few key players involved in the project to join him on the stage and made a toast to Hibernia’s success. He called the project an iconic symbol of our province and our people – a reminder of what we can achieve. Stephen reminisced of the early days of Hibernia and how the project came at a time when Newfoundland and Labrador needed it the most. It was a time of hardship for many as our province faced the economic and cultural challenges of the cod moratorium. Hibernia turned things around, creating thousands of jobs and new government revenue at a time when our province desperately needed it. He said “Today, 95% of the people working on Hibernia are residents of Newfoundland and Labrador. Over the years thousands and thousands of Newfoundlanders and Labradorians have worked on the project. Engineers, technicians, cooks, roustabouts, researchers, tool pushers, production operators, crane operators, radio operators, and so many more.” 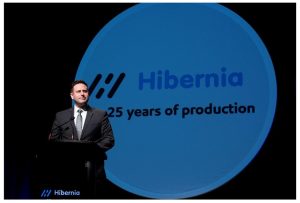 Premier Andrew Furey shared what Hibernia means to him personally, saying it represents the word believe. Premier Furey said Hibernia meant, “Believe in a dream. Believe in the political will and engineering expertise to succeed. Believe in our economic future. To believe in an industry that didn’t exist.” He stated, “They said it couldn’t be done but belief in ourselves and our resourcefulness proved them wrong.” Premier Furey also spoke of ensuring the oil and gas industry’s continued success and governments commitment to the energy industry for generations to come.

The impact of Hibernia on Newfoundland and Labrador cannot be underestimated. The project has been an economic game-changer and the Hibernia and Hibernia Southern Extension owners paid an estimated $19 billion under fiscal agreements to the provincial and federal governments since 1997. The project has also contributed $300 million to research and development, while seeing a 25% reduction in emissions since 2005.

While many thought it couldn’t be done, Hibernia began an industry that now includes four producing oil fields, with the possibility of a fifth – the Bay du Nord project. Hibernia has given Newfoundland and Labrador so much to be proud of and to celebrate and on the 25th anniversary of first oil, everyone throughout the room, throughout the industry, and on the installation, were immensely proud.